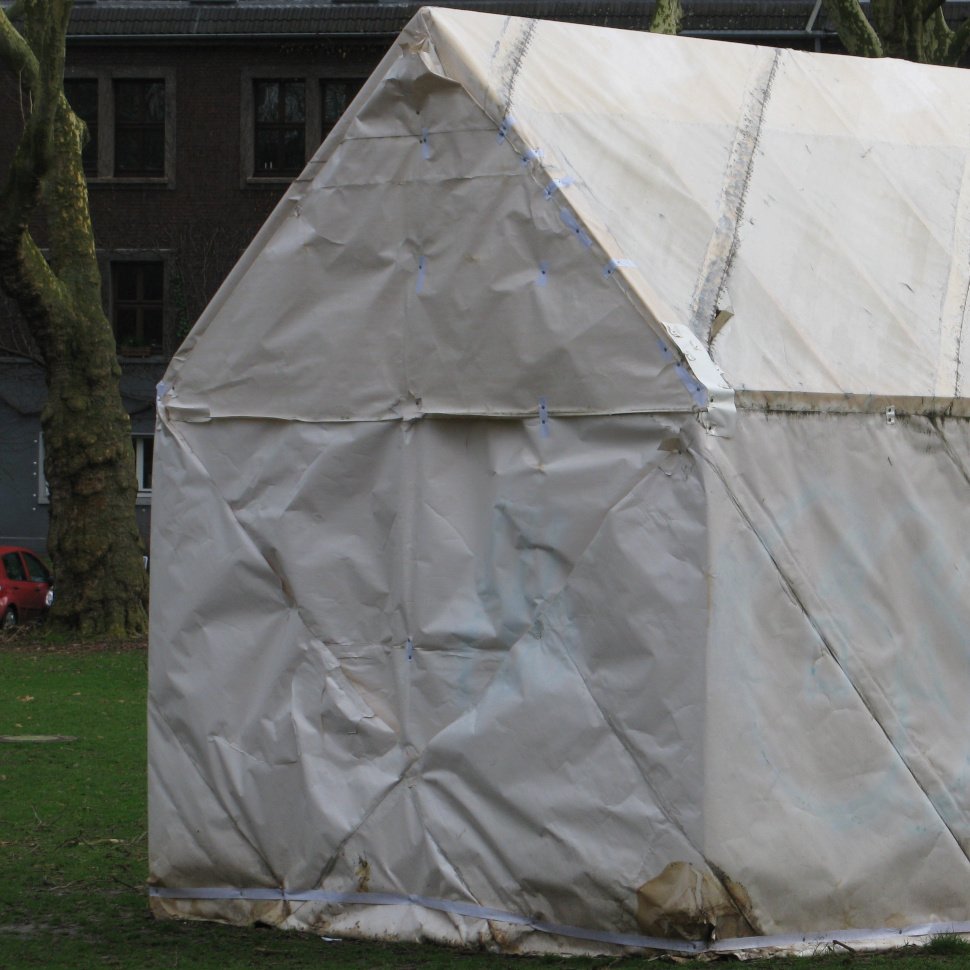 On 7 June 2016 the documentation on Frank Bölter´s HOrigamiUSE was published, comprising 132 pages in size A5. It contains a text contribution by the curator Dr Sabine Maria Schmidt, two separate diaries by the local resident Lisa Lambrecht-Wagenitz and the artist Frank Bölter, and a large number of pictures and illustrations.

The book has been entered into the Deutsche Nationalbibliothek / German National Library here, and into the catalogue of the Nordrhein-Westfälische Bibliographie der Universitäts- und Landesbibliothek / Northrhine-Westfalia bibliography of the University and State Library Düsseldorf here. The full documentation can be downloaded (as a large pdf; 685 MB) from here. It is also available from the association Kunst am Moltkeplatz KaM e.V.; contact here.

On 22 May 2014 there was the farewell gathering for Frank Bölter’s HOrigamiUSE. Almost a year ago, as part of the series junge Kunst am Moltkeplatz / young Art at the Moltkeplatz, Frank Bölter – together with KaM members, local residents and art enthusiasts – had folded his towering white HOrigamiUSE out of laminated paper from a 15 x 15 m tarpaulin according to origami instructions and set it up on the Moltkeplatz. After eleven months outdoors in the sculptures park – exposed not only to the weather – it has aged and changed. As initially agreed, the temporary work is now to be taken down and dismantled.

The association KaM e.V., the artist Frank Bölter and numerous guests bid farewell to HOrigamiUSE and toasted the artist, his work and the Moltkeplatz. Because of intermittent rain showers part of the gatherings was held in the parish hall of the SELK church on the other side of the street. There was ample opportunity for discussion and viewing pictures of HOrigamiUSE and its change over time.

During the finissage for HOrigamiUSE: Frank Bölter (2nd right) talking to a NRZ reporter; NRZ article of 3 Juni 2014 here.

On 23 Januar 2014 Frank Bölter visited the Moltkeplatz in order to ‒ among other ‒ take pictures of the current status of his work HOrigamiUSE.

On 16 November 2013 an artist talk was held with Frank Bölter in the parish hall of the SELK church at the Moltkeplatz. The discussion partner was Stefanie Klingemann, Cologne (artist, curator, and editor of the artists´ magazin MOFF). The discussion essentially revolved around Frank Bölter’s artistic approach and his working methods. Both were illustrated in conversation as well as by means of pictures and videos of his works … accompanied throughout by an open and interested exchange with the guests.

A special point was of course the work HOrigamiUSE, folded and erected by Frank Bölter in June 2013 on the Moltkeplatz with a large number of participants … and the development of this work over time. At the end there was time for a tour around the temporary work in the park opposite the church and some more lively discussions in the parish hall … also to warm up again.

The WAZ newspaper had invited to the artist talk with an article on 13 November 2013; KaM´s invitation here.

At the end of October 2013 the art magazin KUNSTJAHR 2013: Die Zeitschrift, die Bilanz zieht carries an article by Marion Leske on art in public spaces mentioning Frank Bölter´s HOrigamiUSE and the Moltkeplatz; for the article see here.

On 23 June 2013 was the vernissage with the opening of the exhibition of HOrigamiUSE at the Moltkeplatz Dr Sabine Maria Schmidt provided the introduction to the work and the artist.

Among others, the Essen Südanzeiger had announced the opening with an article on 26 June 2016. For pictures of the previous construction of the work see here.

On 4 May 2013, Frank Bölter exhibited, among other things, a cityscape made of various origami-folded model houses at the event Kunst im Wohnraum / Art in the Living Room Essen.

Picture gallery of the changes of HOrigamiUSE during its lifetime here.

This project is sponsored and supported by Allbau Stiftung and Ingenieurbüro Lars Römling.