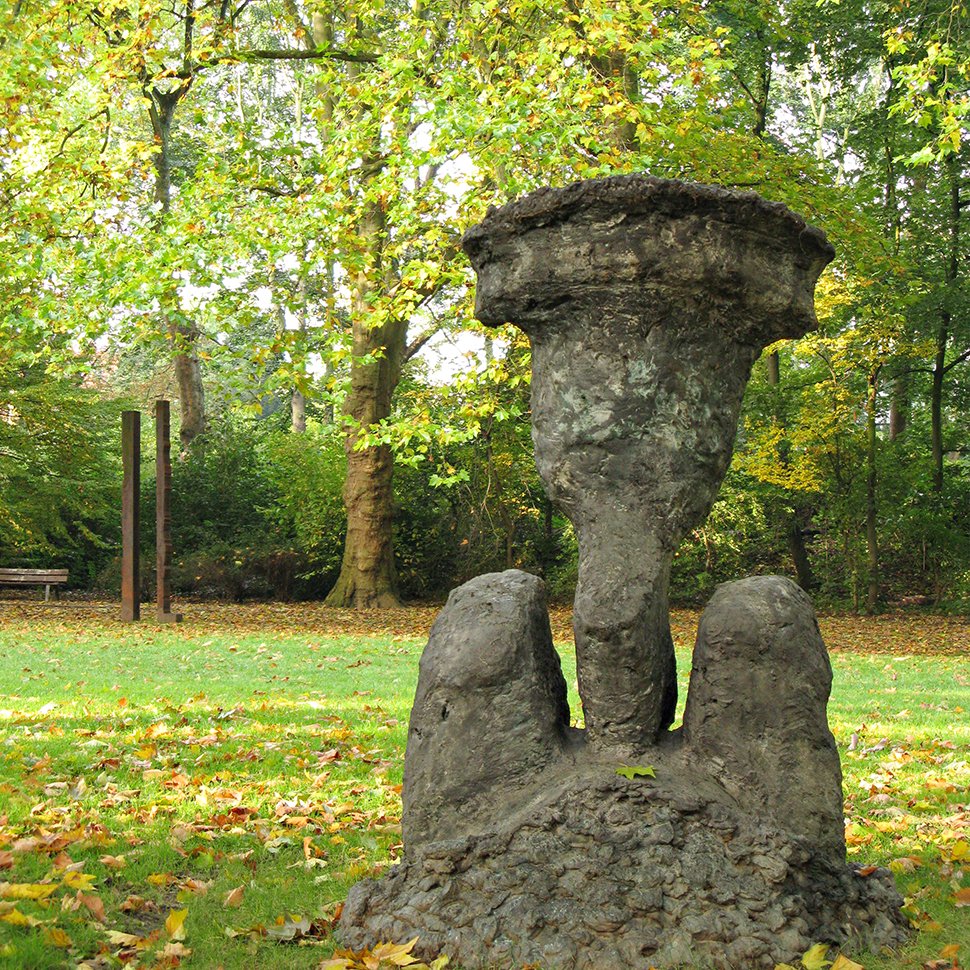 „The tool is his whole body: with all the strength of his naked body, Heinz Breloh (1940 – 2001) worked an increasingly solid mass of plaster according to a predefined choreography. „He embraces the block with his arms, pierces it with his knees and legs, throws his head to and fro to smooth out a horizontal surface on top (…) He painstakingly follows his body´s trajectory ever slower through the white massif „, remembers Prof Dr Manfred Schneckenburger, who once was allowed to watch Breloh in his studio. Cast in bronze, the result bears witness to the exhausting, brutal, and at the same time intimate act of procreation and giving birth to the sculpture. Questions about proportions, form, material and space are sidelined, we are dealing with the essence: in creating the Life Size / Lebensgröße the sculptor is turning his innermost inside out.“
(Tankred Stachelhaus)

“The work is done when there is no longer any distance between the work and myself.“
(Heinz Breloh)

„In a fixed choreography, the artist walks, dances around the soft plaster mass. He throws himself against it with his whole body – legs, hips, chest, back, head – embraces the block with his arms, pushes through it with his knees and legs, moves his head back and forth and thus grinds out a horizontal upper end. He presses, twists, writhes against, into, and against the block according to a precisely set program, plowing through the plaster on the inside, feeling and straining around it from the outside. He pulls his body trajectory until the material has become hard and resistant. The finished sculpture holds the body form as a negative volume. It is (in the classical sense of memory) a monument to the body’s trace.“

In his theory on Sculpure as a Process, Heinz Breloh writes:

„The movement in the soft matter creates shadows, imprints, forms, beings of desire. In the dream. The life, the doing is the painful process without ease. One clings to matter in order not to fall endlessly in becoming one with it.“

For a detailled description of Heinz Breloh´s œuvre by Manfred Schneckenburger see here.

On the process of creating a Lebensgröße / Life Size sculpture (in German) see here.

Other Lebensgröße / Life Size sculptures are on display here (among other places; all in German):

Hilden, newspaper article Westdeutschen Zeitung dated 12 May 2010 on erecting a Life Size / Lebensgröße sculpture on the square in front of the train station.

After a temporary absence of the Lebensgröße / Life Size sculpture from the Moltkeplatz, a vernissage was held on 13 March 2016 on the occasion of its re-erection. KaM e.V. thanked the Breloh estate and all others involved in making the re-installation of this man-sized sculpture on Moltkeplatz possible and thus preserving the work for art in public space in the city of Essen

More about the Vernissage on 13 March 2016 and some explanatory notes (in German) here.

On the occasion of the vernissage, a detailled description of Heinz Breloh´s œuvre was presented by Manfred Schneckenburger; read about it here.