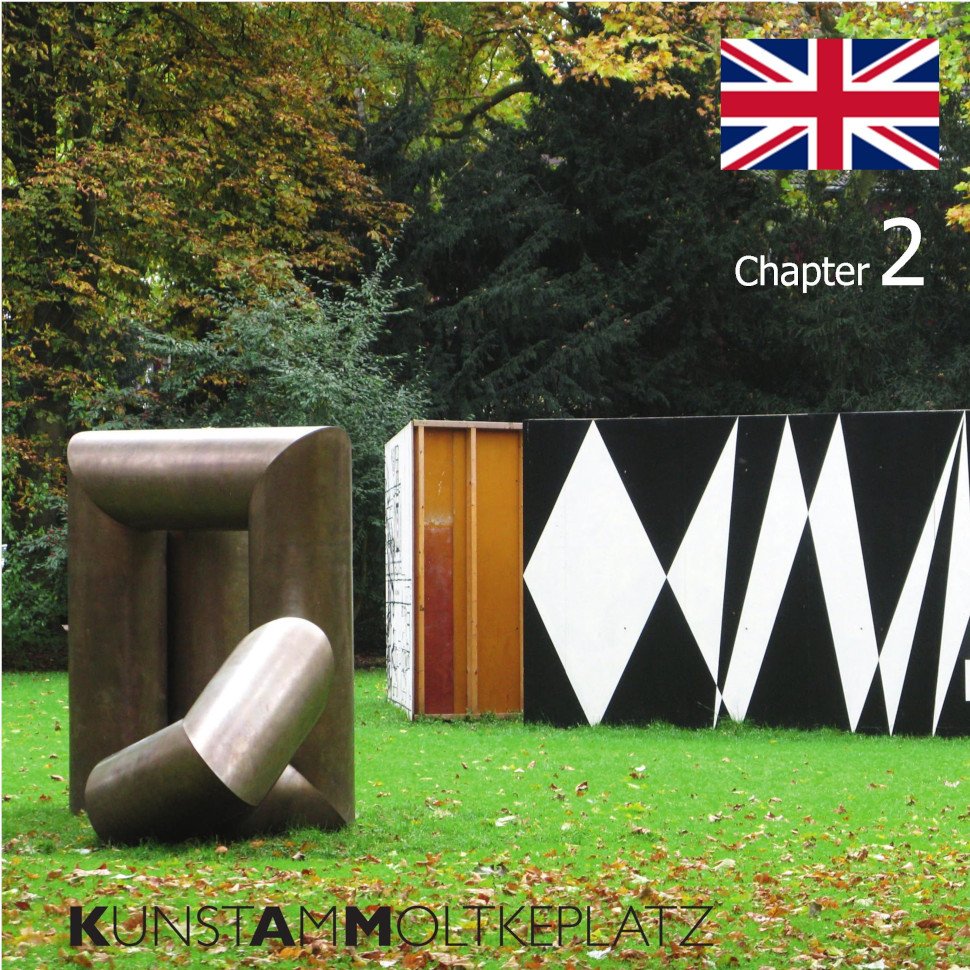 To return to the previous chapter see here.

The sculptures and their locations are aligned with the layout of the Moltkeplatz and the pattern of the 100 years old plane trees lining the park.

With the exception of Lutz Fritsch´s EIN•STAND / MONO•POLE, which rises from traffic island at the junction of Moltkeplatz / Ruhrallee, all other works are situated on the elongated green between the Moltkeplatz street and the railroad tracks on the other side. On the green, directly opposite Lutz Fritsch´s steel needle, one finds Ulrich Rückriem’s ohne Titel / untitled sculpture of Anröchter stone. If you walk around the green in a counter-clockwise direction, Gloria Friedmann´s Denkmal / Monument next catches the eye: a dead tree, set in a tall concrete wall in bright crimson. Further along the footpath next to the railroad tracks, this is followed by Ansgar Nierhoff´s slim Paarweise / In Pairs twin stele of fired forged steel. On the other side of the park, in the corner facing the church – and aligned with it – Hannes Forster uses redbrick and mortar to tell Eine echte falsche Geschichte / A Genuine Fake Story. Walking back in the direction of the starting point at the traffic island, Friedrich Gräsel´s Hannover Tor / Hanover Gate made of annealed stainless steel is next, and finally, Heinz Breloh´s Lebensgröße / Life Size bronze torso.

Set in the lawn, and readable from the footpath, stainless steel signs of size 20 x 20 cm point out each art work (in German); for an example see here.

Traffic islands are being perceived as an obstacle without any quality of stay, a place that is to be bypassed. This could also be true for the wedge of lawn forming the triangular traffic island guiding the traffic between the Moltkeplatz and the Ruhrallee, laid out in accordance with the guideline for the installation of junctions, the „Richtlinie für die Anlage von Knotenpunkten“ (RAS-K). Here, however, a ten-meter high steel pipe punctures the no man´s land like a needle. Pedestrians who might otherwise have quickly crossed this “non-location” are made to pause and think.

Lutz Fritsch (* 1955) developed the sculpture in 1990 specifically for this site. The sculpture marks the entrance to the Moltkeplatz. At the same time, as a vertical orange-blue convergence point, it absorbs its environment.

The quarry is his studio: Ulrich Rückriem (* 1938) sinks wedges into holes and drives them into the rock with the sledgehammer, splitting it open after a few blows. Made from Anröchter Stone – some 100 million years old – the sculpture is completed when the individual parts are reassembled at the fracture planes. Rückriem as a trained stonemason reveals the essence of the rock, the tension which it holds inside, its actual shape, its spatial radiation, and its causal relation to the ground on which it rests.

On the Moltkeplatz, the surface of the wedge-shaped sculpture, made of four stone blocks piled on top of each other, gradually takes on the visual appearance of the surrounding trees. After the obviously artificial intervention, mother nature takes back what is hers. And the rock remains a rock: massive, immovable.

„Pulling out of the mountain, watching, deciding.“

Red is the colour of power, of alarm, anger, love, emphasis, but also of correction. With her Denkmal / Monument, Gloria Friedmann (* 1950) addresses the cultural connection between mankind and nature. For the German-French artist mankind and its often self-destructive and paranoid actions remain part of the natural evolution, and thus of the world. According to Uwe Rüth, she therefore stands for an „ethical responsibility of mankind, which she – in an artist´s way – recognizes as part of our species, and as witness of its existence and its abnormal attitudes, while capturing it in the naivety of insistently spatial pictures”.

The bright crimson red concrete wall with the dead tree from the Essen-Stadtwald area set into it can be taken as a note of the vibration that we feel inside ourselves whenever nature is oppressed … or is awakening to new life.

„Nature and I. As part of nature, I am myself nature, and at the same time I am myself. Hence my interest in the non-human nature, outside of my own self.“

Heavy material, light poetry: The sculpture of Ansgar Nierhoff (1941 – 2010) turns the inside out. The two unequal steel pillars stand back to back, yet they once were one. The relief surfaces originating from the separation of a single steel ingot into two separate stelae are mutually dependent on each other – whilst at the same time being unique. Depending on the perspective they are protecting – or turning their back on – each other. It’s not just about the spatial relationship of two bodies, but also about the carving of a characteristic signature out of one single smooth block. The brute force of the industrial manufacturing process is contrasted by the exhilarating lightness of the stelae.

„My sculpture is not the speedy idea and smooth shape. Sculpture is an action process: reflecting my history, my experiences, and the constraints from which I am endeavouring to – somewhat – free myself and my work.”

The church building and the transformer station are confronting each other; something that is definitely wrong. For the truth is: spirituality and technology are not opposing each other, they can perfectly well complement and stimulate each other.

At least that is the way Hannes Forster (* 1955) defines his environment of 1990. His redbrick work is aligned with the Lutheran church at the Moltkeplatz constructed by Otto Bartning on the opposite side of the street. Hannes Forster´s structure shows the stylized layout of a nave, enveloping one corner of the transformer station. The station thus becomes an integral part of the artwork, representing Enlightenment, modernity, technology, and change; in short, it stands for the challenges faced by religions. The work leads into the world of change. At the same time it shows that it is never too late for art: Eine echte falsche Geschichte / A Genuine Fake Story was only completed by Hannes Forster 22 years after he started its construction.

„I wanted to show the change that the church as an institution has gone through over the centuries.“

If a painter draws a line, Friedrich Gräsel (1927 – 2013) uses a tube instead. The Bochum sculptor picked up the formal language of the industrialized Ruhr District with his powerful massive tubular structures. He freed the tubular element from its original purpose-driven use, and emphasized its specific aesthetic character.

The Hannover Tor / Hanover Gate on Moltkeplatz combines classical sculptural principles and modern manufacturing methods and reference points, too. The shape of the sculpture and the bronze-coloured tone of the steel tubes exude a protective aura. When you pass through and walk around it you gradually experience its manifold spatial relationships which extend beyond the work into its surroundings. First, there are only glimpses, and then you discover the whole park. Thus, being the first sculpture set up at the Moltkeplatz, the Hannover Tor / Hanover Gate is also the starting point for the discovery of the whole ensemble there – and possibly of the industrial culture of the region.

The tool is his whole body: with all the strength of his naked body, Heinz Breloh (1940 – 2001) worked an increasingly solid mass of plaster according to a predefined choreography. „He embraces the block with his arms, pierces it with his knees and legs, throws his head to and fro to smooth out a horizontal surface on top (…) He painstakingly follows his body´s trajectory ever slower through the white massif „, remembers Prof Dr Manfred Schneckenburger, who once was allowed to watch Breloh in his studio. Cast in bronze, the result bears witness to the exhausting, brutal, and at the same time intimate act of procreation and giving birth to the sculpture. Questions about proportions, form, material and space are sidelined, we are dealing with the essence: in creating the Lebensgröße / Life Size the sculptor is turning his innermost inside out.

“The work is done when there is no longer any distance between the work and myself.“

To return to the beginning of the brochure see there. To go to the next chapter see here.