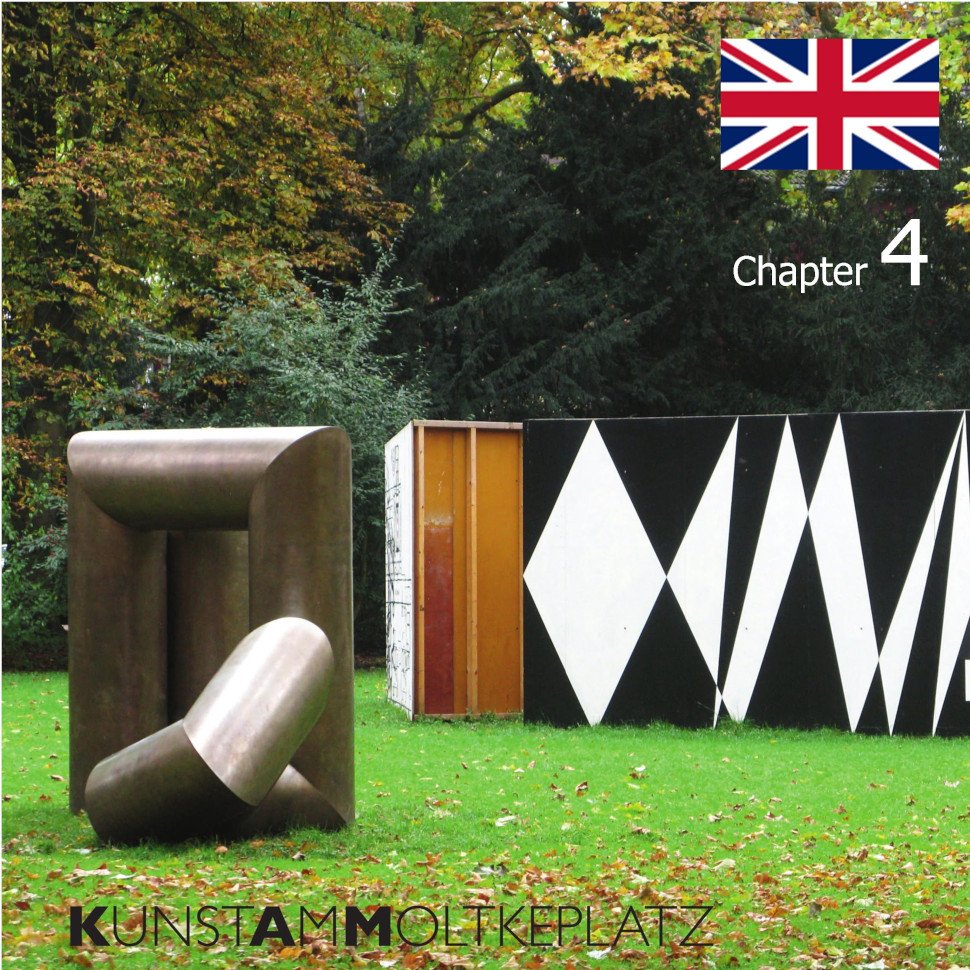 To return to the previous chapter see here.

It all started with a protest: early in 2006 a Moltkeplatz resident noted that preparations were being made to remove art works from the green opposite his home. City officials, upon request, confirmed that quite advanced plans existed to relocate the art works to the Gruga Park. Consequently, ten residents of the Moltkeviertel on 16 June 2006 founded the association Kunst am Moltkeplatz KaM e.V. / Art at the Moltkeplatz (the full and awkward name being Verein Kunst im öffentlichen Raum am Moltkeplatz Essen / Association Art in Public Spaces at the Moltkeplatz Essen, abbreviated KaM e.V.). The purpose as spelled out in the association´s bylaws carried a clear message to the officials of the City of Essen: “The purpose of the association is to preserve, promote and develop art in the public space at the Moltkeplatz in Essen, to maintain the sculptures and art objects installed there, and to influence any changes to the overall impression in this respect.”

Numerous residents shared the view that efforts should be undertaken to avert the imminent loss to their living quarter. The association´s ten founding members arranged a first public meeting by the sculptures, collected more than 400 signatures in support of the sculptures, and addressed and informed the public, politicians, city officials, the owners of the sculptures, the press, and the artists whose works were scheduled to be removed.

Friedrich Gräsel was the first artist to demonstrate his vehement support for the art at the Moltkeplatz, speaking out publicly, and having his picture taken next to his work for press articles. In cooperation with Ansgar Nierhoff, Ulrich Rückriem, and Krimhild Becker (widow of the sculptor Heinz Breloh) – whose works were all part of the ensemble – he formulated an appeal to preserve the ensemble at its current location. Other artists insisted that their works were site-specific, and objected to them being relocated. Efforts of the artists led to an expert´s opinion by Prof Dr Manfred Schneckenburger, former Director of the Kunstakademie / Academy of Fine Arts Münster, and artistic director on two occasions of the documenta in Kassel. The summary of the joint protest was: under no circumstances must such an outstanding and coherent ensemble of sculptures be dismantled … especially in view of Essen in 2010 becoming European Capital of Culture RUHR.2010.

The founding of the association demonstrated the residents´ civic commitment, and it made a difference, providing a contact for the city officials for the ensuing talks and negotiations with all parties involved. During numerous discussions with the officials KaM repeatedly pointed out the potential of the Moltkeplatz as a location for the arts, and offered to commit to the restoring, maintenance, and upkeep of the sculptures under long term (stewardship) contracts. In doing so, the association made clear that they would bear the cost.

The efforts of the association were not undisputed. For instance, one then-owner of some of the works claimed that it were just some well-to-do residents who wanted to defend their “private park”. Accompanied by open letters in both directions, and as a demonstration, this gallery owner removed the work of one artist. When – contrary to promises out of the Essen town hall to enter into talks with the residents – a truck crane arrived instead in an attempt to relocate the Hannover Tor / Hanover Gate to the Gruga Park, residents rushed in to form a human chain around the sculpture, which was owned by an out-of-town bank.

Anxiety and expectations persisted until early winter 2007, when contracts covering the stewardship for the works of Friedrich Gräsel, Ansgar Nierhoff, and Ulrich Rückriem were signed. After the finalization of the contracts for the remaining works, KaM invited for their first “Skulpturenfest / Sculptures Festival” on 2 December 2007. Artists, members of the association KaM, supporters, and friends of the Moltkeplatz came together to meet by the sculptures. Despite rain and cold, the successful efforts were jointly celebrated in high spirits. This meeting was the first in a series of annual Sculptures Festivals – in subsequent years always held in summer, though, and at much more agreeable temperatures.

A MIRACLE FOR THE MOLTKEPLATZ

When the first indications came to light that the sculptures ensemble might indeed be preserved, members of the association KaM started to clean the art works – within the scope possible. Trash and waste was removed, and the exterior of the works was cleaned with water and brush. Following the signing of the stewardship contract in January 2008, the newly formed association KaM – with funds donated by its members – commissioned the professional restoration of Gloria Friedmann´s Denkmal / Monument. From 21 May 2008, the work with the dead tree set in the tall concrete wall was – very prominently – restored to its former bright RAL 3002 “Karminrot” crimson colour. The artist, who lives in France, responded to the association by email – providing a stimulus for the future: “bon jour chers amis: thank you so much for the perfect restoration, I am very positive‚ TOTALLY SURPRISED‘!!! … you have achieved a MIRACLE for the Moltkeplatz.“

The City of Essen parks department Grün und Gruga strongly supported the efforts to improve the optical appearance of the sculptures lawn and its surroundings, and took care of the bushes and green areas. KaM members laid out turf patches around the sculptures, and signs in the grass pointing to the art works. The period of neglect of the sculptures ensemble – which had begun with the early death of Jochen Krüper in 2002 – came to its end nearly two years after the founding of the association. The new beginning was celebrated at the second sculptures festival on 31 May 2008.

SUCCESSFUL BASIS FOR THE PRESERVATION

By way of a trustful cooperation between the City of Essen, the owners of the art works, and the association KaM with its strong civic commitment, the effort to form the basis for the long-term preservation and the development of the art location Moltkeplatz, had come to a successful end – and established a role model for dealing with similar situations of art in other public space in Essen. For the first time in the summer of 2008, in a separate guided tour of the Moltkeplatz, the achievements were presented to a group of Essen local politicians. Numerous visits, tours and discussions have followed since; and the „Moltkeplatz Model” is also being discussed in other communities.

The association began to carry out their further commitments: in addition to the regular cleaning of the art works efforts were made – and continue to be made – to publicise the art site and its works; information material is provided; press articles are suggested, and internet posts are written or maintained; networks are established and expanded; guided tours take place: for children and adults, students of all stages up to university. The website www.kunst-am-moltkeplatz.de is set up, and – in preparation for the year of the European Capital of Culture RUHR.2010 – it is also translated into English. A member of the association sets up a very instructive geocache which can only be solved after dealing with the sculptures in detail.

A peculiarity of the park tends to lead to difficulties, and in some cases to conflict: while Jochen Krüper, in consultation with the city, had started to set up the sculptures ensemble in 1982, the park was later, around the turn of the millennium, also made an exercise area for dogs to run freely and unleashed. The activities of the association at the sculptures park are influenced by this contentious issue.

BROCHURE ON THE MOLTKEVIERTEL / MOLTKE QUARTER

With a large percentage of KaM´s members living in the Moltkeviertel the association organizes lectures about this living quarter: a very interesting area from an urban planning and architectural point of view. In addition, KaM is the local partner in the creation of the booklet Das Essener Moltkeviertel – weltweit einzigartige RaumKunst / The Essen Moltke Quarter – worldwide unique urban planning art by Tankred Stachelhaus. Publisher is the Rheinischer Verein für Denkmalpflege und Landschaftsschutz / Rhenish Association for Conservation and Landscape Protection in Cologne. Published during the year of the European Capital of Culture RUHR.2010, it is handed out to all members of the Rhenish Association. In addition, KaM has since distributed some 3,000 copies. Among others, the booklet covers the art works at the Moltkeplatz. For this part, members of KaM provide translations into several languages which KaM attaches to the booklet. This way, the association introduces the sculptures ensemble also to non-German-speaking visitors.

In 2011 the parks department removed the ground-based wood-lead work by Christa Feuerberg which had become derelict and dangerous. Later that year, KaM is confronted with the intention of the owner of Friedrich Gräsel´s Hannover Tor / Hanover Gate to remove this landmark in order to sell it. Following some six months of activity, the association Skulpturenverein Moltkeviertel e.V., newly-founded for this purpose, succeeds in raising sufficient funds – within the tight time limit set – to acquire the sculpture. Donations come from close to 100 citizens and Essen-based companies and institutions. On 23 December 2011 the purchase price is transferred to the former owner – an out-of-town bank – and the sculpture is thus permanently secured for the Moltkeplatz. With a benevolent twinkle in the eye a person in the neighbourhood had commented: „Nur ein Tor kämpft um ein Tor. Respekt … / literally: Only a fool fights for a gate. Respect…” (pun working in German only; German „Tor“ translating to both „fool“ and „gate“).

RETURN OF THE LEBENSGRÖSSE / LIFE SIZE

From the end of 2013 till February 2016 the site of the Lebensgröße / Life Size sculpture by Heinz Breloh is void: following the death of the artist and later also of his widow Krimhild Becker, the artist´s brothers as heirs take custody of this tall-as-a-man sculpture. It takes about two years until new contractual arrangements are agreed and signed between all parties involved, and the sculpture is re-erected at the Moltkeplatz.

At the vernissage on 13 March 2016 the Mayor of the City of Essen, the Coordinator for Art in Public Space, and the association KaM express their thanks to the artist´s brothers for their willingness and patience, and to all participants in the process for their cooperation and support.

ROLE MODELS FOR DEALING WITH ART

The activities and the commitment of KaM and the very good cooperation with the relevant city departments are considered exemplary for dealing with art in public space, and form a role model in the City of Essen. A full list of activities of the association would exceed the scope of this brochure; it can be found at the www.kunst-am-moltkeplatz.de web site. Below just a few items:

To return to the beginning of the brochure see there. To go to the next chapter see here.