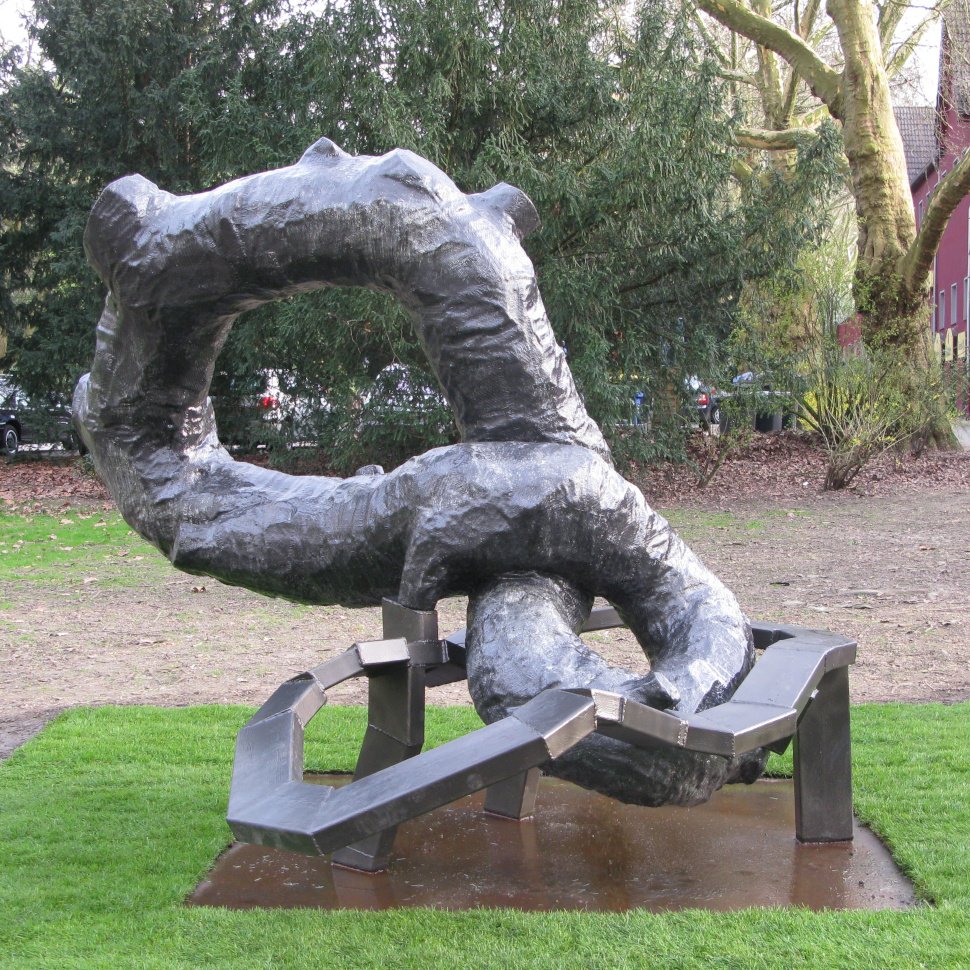 This work by Christian Forsen opened ‒ at the beginning of the year of the RUHR.2010 Kulturhauptstadt / Cultural Capital of Europe ‒ the series junge Kunst am Moltkeplatz / young Art at the Moltkeplatz. After the vernissage on 21 January 2010, it was part of the sculptures park Moltkeplatz for some eight months as had been agreed.

On 21 January 2010 was the vernissage for this temporary work made of steel and synthetic materials. Despite the cold and wet weather, a large number of interested people came together and listend to the introduction by Dr Sabine Maria Schmidt, the Curator of Contemporary Art at the Folkwang Museum, who also curated this series. WAZ/NRZ reported with an artikel on 23 Januar 2010.

„It was Christian Forsen´s (*1973) task to be the first artist to add a new art work to an existing ensemble of outstanding sculptures. His approach was quite pragmatic: He celebrates the art in public spaces. After years of decline his work reflects the new beginning: Like Phoenix rising from the ashes, Nachhaltiger Vogel / Sustainable Bird makes the art at the Moltkeplatz come alive again. Reminiscent of a charred tree trunk the double loop made of synthetic material points towards the plane trees´ tops that make up the airy roof of the open air display. Seemingly floating fragilely above the steel frame it looks as if it might be about to lose its balance; its momentum appears to be ever changing. You feel challenged to intervene in order to secure its balance. The work exudes a feeling of encouragement to indulge in the excitement of art, and a declaration of love for an unfettered commitment to art. Fly, birdie, fly!“
(Tankred Stachelhaus)

„I wanted to add something to the Moltkeplatz that was missing: a warm, sociable meeting place. For this reason, my deliberations started off with a fire place.“
(Christian Forsen)

Poster as a Documentation

In July 2010 a poster was published for this work. It displays the work on the front, and a text contributed by Dr Sabine Maria Schmidt on the back; its size is A 2. Clicking or touching into the pictures will enlarge them.

The publication has been entered into the NRW Bibliographie / Bibliography; see here. It is also available from the association Kunst am Moltkeplatz KaM e.V.; contact here.

For the finissage and dismantling of the work see here.