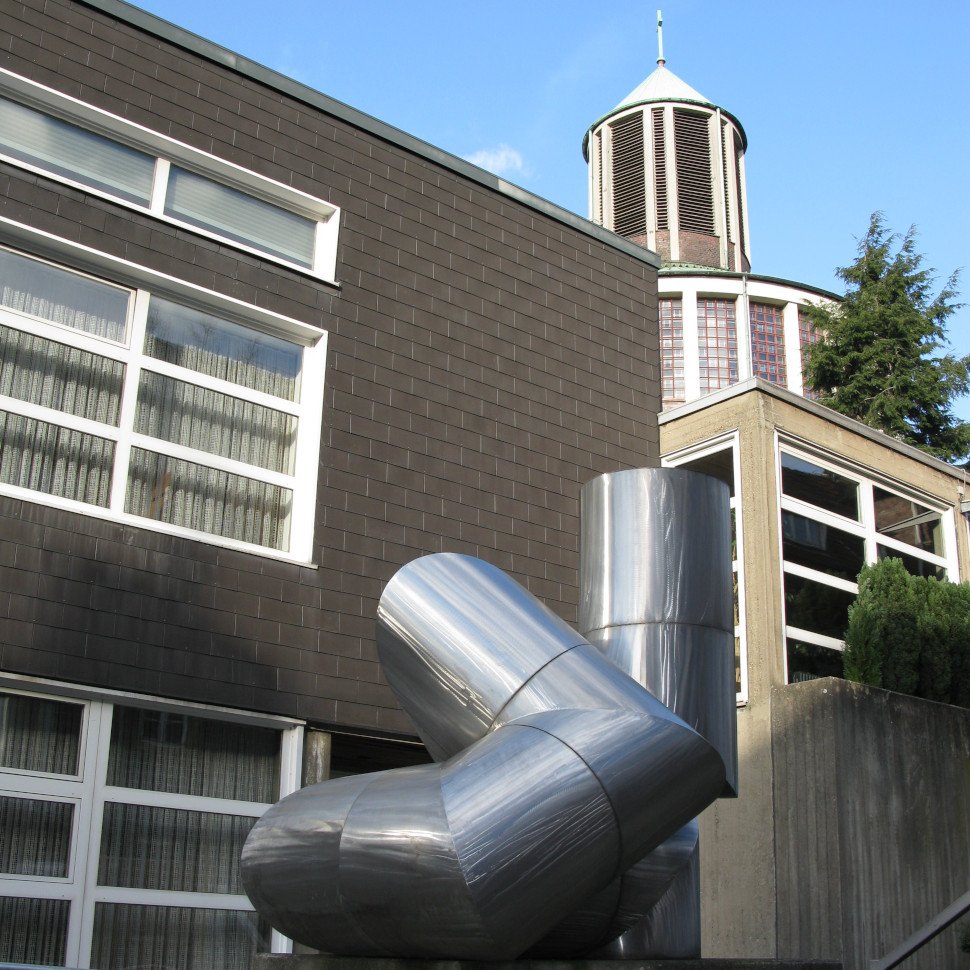 Stainless Steel Sculpture, untitled, 1974, next to the Auferstehungskirche / Church of the Resurrection

Information about the listed Auferstehungskirche / Church of the Resurrection in the compilation of the Otto-Bartning-Arbeitsgemeinschaft e.V., and in Wikipedia.

„The Church of the Resurrection in Essen-Huttrop was built in 1929 by the famous architect and church builder Otto Bartning. From a historical point of view, Bartning took up the form and function of circular churches that used to serve as baptisteries or funeral churches.

During World War II, the structure suffered considerable damage, which was repaired in the following decades.

In 1974, the Essen architect Wolfgang Schwartz was commissioned with a project, in which the sparse street space between the church and the parish hall was also planned as a location for a modern sculpture. ‒ Design and execution of this work were entrusted to me.

It is difficult to devise ‒ for a sloping street level crowned at the upper end by an epochal building ‒ a sculpture that will integrate into the conditions of the space in terms of material, form and function, but still makes its own contribution in terms of coexistence of the church building and the parish hall as a community center. This requires, in addition to an artistic signature, the incorporation into the overall context. In turn, this leads to the precise study of material and construction, i.e. to the material as a carrier of expression.

Since the beginning of my work, postmodern constructing with industrially manufactured materials and semi-finished products has led me to the concept of ‚functional sculptures‘ in order to employ the manifold interweavings of art and technology for the purposes of art in public space.

I have therefore responded to the concealed steel skeleton of the church with tubular forms made of shiny stainless steel. The result was a correspondence between circular elements and round and circular upward movements: thus the sculpture has become the intermediate form between the lower level of the community center and the circular church towering above. A concrete pedestal forms the base ‒ right in the middle between upward and downward stairs and paths between the church and the community center.

This way, the sculpture has become a sign pointing the way and providing a meaning. From the horizontal level, volumes and modules ‒ akin to steps ‒ rise upwards in circles with the final form reaching skywards.

The sculpture thus blends itself into the church: first of all through its external movement, which is similar to the central church structure. ‒ In addition, in a propaedeutical sense, it refers us from the exterior of the church to the interior: under the lunette, the highest point of the church´s interior, one finds the baptistery ‒ surrounded by numerous Christian symbols. Baptism and resurrection complete the theological circle of meaning. Architecture and sculpture are the media that make this message legible.“

Note: unlike to the mention above, the Auferstehungskirche is actually located in the Essen-Südostviertel district. The two districts Huttrop and Südostviertel border each other and are often confounded.

To the start page on Friedrich Gräsel´s work at the Moltkeplatz here.