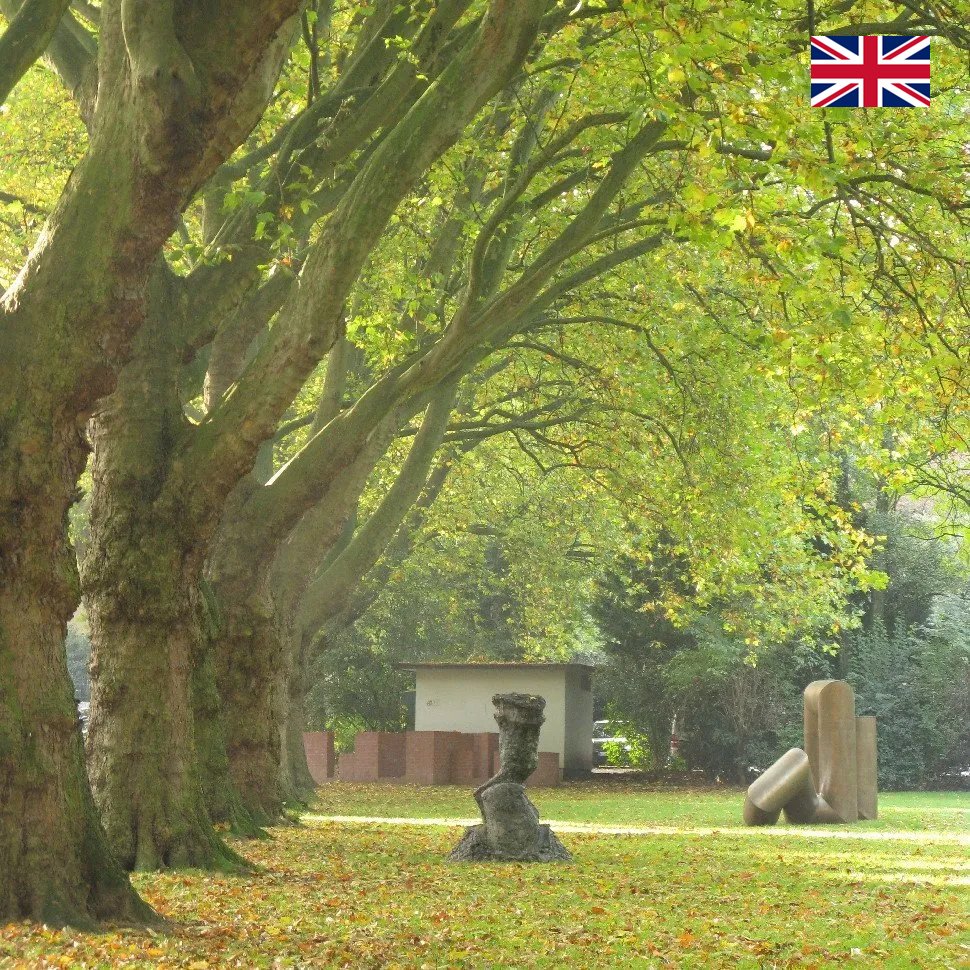 For a gallery of clickable pictures / links of the permanent sculptures see here.

For a gallery of clickable pictures / links of temporary sculptures see here.

These temporary works have been put up within the series „junge Kunst am Moltkeplatz / young Art at the Moltkeplatz“ which was started by KaM e.V. in 2010.

In early 1982 Friedrich Gräsel’s Hannover Tor / Hanover Gate ‒ made of annealed stainless steel ‒ was erected by the Essen gallery owner Jochen Krüper († 2002) as the first work of art on the sculpture park opposite his gallery house and family residence at Moltkeplatz 5. Subsequently, a sculpture ensemble was gradually set up which was specifically completed within the Material and Space / Material und Raum project initiated by Jochen Krüper and Uwe Rüth in 1990/1991. The press reported on this with an NRZ article dated 22 Dezember 1990. The emergence of the ensemble is described in great detail by Uwe Rüth as the first part of the KaM Brochure published in 2017. Various artworks from this 1990/1991 project have since decayed and had to be dismantled and removed. Since 2011, the ensemble consists of seven permanent works … and ‒ additionally, for limited periods of time ‒ one temporary work.

The sculptures and their locations are aligned with the layout of the Moltkeplatz and the pattern of the 100 years old plane trees lining the park.

More information on the KaM Brochure of 2017 here; for an English language text-only version see here.

A walk around the sculptures at the Moltkeplatz

With the exception of Lutz Fritsch´s EIN•STAND / MONO•POLE, which rises from a traffic island at the junction of Moltkeplatz / Ruhrallee, all other works are situated on the elongated green between the Moltkeplatz street and the railroad tracks on the other side. On the green, directly opposite Lutz Fritsch´s steel needle, one finds Ulrich Rückriem’s ohne Titel / untitled sculpture of Anröchter stone. If you walk around the green in a counter-clockwise direction, next is Gloria Friedmann´s Denkmal / Monument catching the eye: a dead tree, set in a tall concrete wall in bright crimson. Further along the footpath next to the railroad tracks, this is followed by Ansgar Nierhoff´s slim Paarweise / In Pairs twin stele of fired forged steel. On the other side of the park, in the corner facing the church – and aligned with it – Hannes Forster uses redbrick and mortar to tell Eine echte falsche Geschichte / A Genuine Fake Story. Walking back in the direction of the starting point at the traffic island, Friedrich Gräsel´s Hannover Tor / Hanover Gate made of annealed stainless steel is next, and finally, Heinz Breloh´s Lebensgröße / Life Size bronze torso.

Set in the lawn, and readable from the footpath, stainless steel signs of size 20 x 20 cm point out each art work (in German); for an example see here.

How to get to the Moltkeplatz … and other matters

For ways to get to the Moltkeplatz ‒ including maps and information on public transport ‒ and some miscellaneous items see here (in German).

Selected other Public Art Works in the city of Essen

For other selected art works in public spaces of the city of Essen – in the vicinity of the Moltkeplatz, or by artists present here – see here (in German).

A summary of the history and present of the art venue Moltkeplatz and its artworks ‒ both permanent and temporary ‒ can be found in the 52-page brochure KUNSTAMMOLTKEPLATZ: 10 Jahre Kunst am Moltkeplatz KaM e.V. ‒ 35 Jahre Skulpturenwiese Moltkeplatz / 10 years association Kunst am Moltkeplatz KaM e.V. ‒ 35 years sculptures at the Moltkeplatz, published by the association KaM e.V. in September 2017. Dr Uwe Rüth ‒ director of the Sculptures Museum Glaskasten in Marl during the time of the ensemble’s creation ‒ contributed the article Das Moltkeplatz-Ensemble und sein Entstehen – Eine Hommage an Jochen Krüper / The Moltkeplatz Ensemble and how it came into being. A homage to Jochen Krüper. More information in the KaM Brochure of 2017 here; for an English-language text-only version see here.

The reason for establishing our association KaM e.V. was the planned removal of sculptures in 2006 with the threat of the sculpture ensemble being dismantled; more about it (in German) here.

The full brochure (pdf, with images; in German) can be downloaded from here. Entries on temporary works after the publication of the brochure in 2017 are added as loose leaves; see here and here.