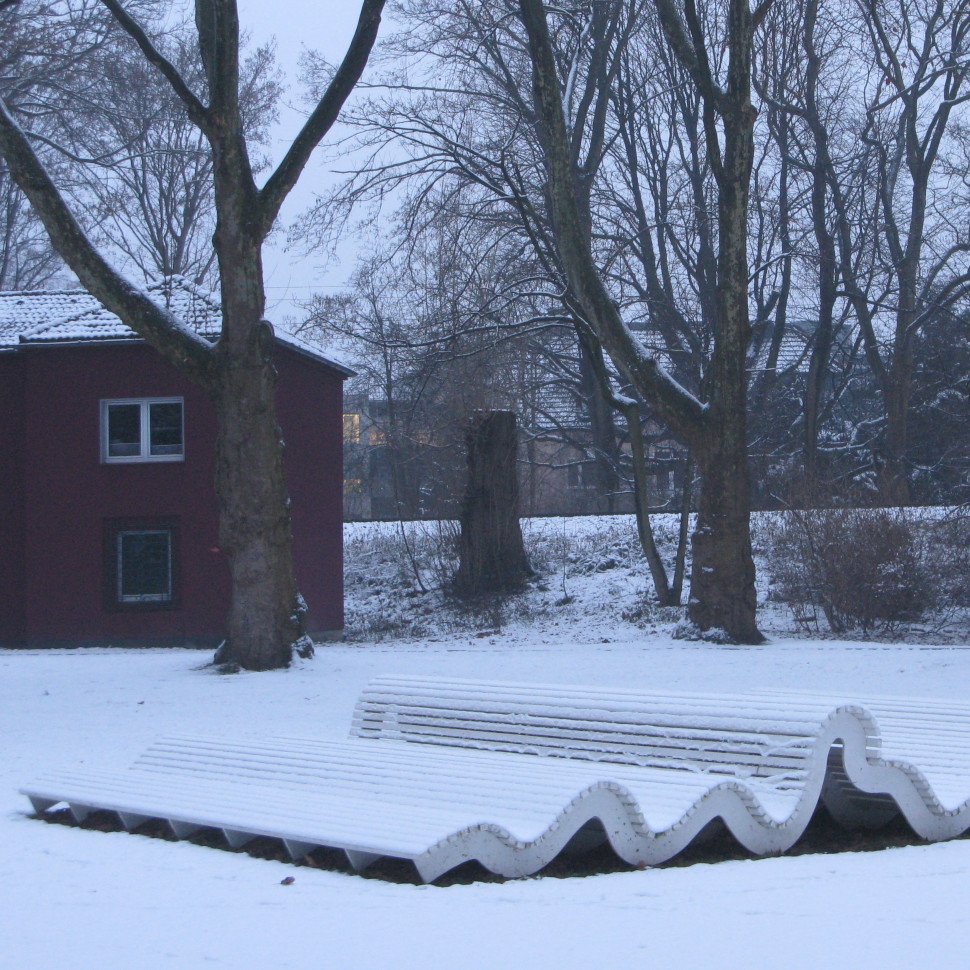 On 22 May 2017, the artist Martin Pfeifle and some helpers dismantled the wooden sculpture onda after a year of display at the Moltkeplatz and packed it for transport. After refurbishment, the work was set up again after a short time for a temporary exhibition at the monastery museum in Bad Schussenried (county Biberach); see here (picture at the new installation site by Martin Pfeifle).

On 20 May 2017 a finissage was held to say goodbye to Martin Pfeifle´s temporary work onda ‒ the large white wave ‒ at the sculpture park Moltkeplatz. Both KaM and the press had invited for the event: NRZ on 20 May 2017 and Südanzeiger on 20 May 2017.

Quite a large group of interested people listened to the explanations of the curator Dr Marcel Schumacher about the work, toasted the artist and his work and took the opportunity to experience onda once more and for the last time as a social sculpture. The association KaM e.V. thanked all sponsors and supporters … and especially the artist and the curator. For a smaller group, the gathering with the artist by onda ended quite late.

The documentation for Martin Pfeifle’s ONDA was published on 19 May 2017. The brochure is of DIN A5 size; it contains 52 pages. There is a text contribution by the curator Dr Marcel Schumacher (Aachen-Kornelimünster) and an extensive picture section. The latter shows two images per page: one each of onda on the sculpture park Moltkeplatz and a second of Martin Pfeifle on a smaller version of onda during the COFA Contemporary exhibition in Cologne as a booth of the Galerie Clement ‒ see contribution dated 17‒20 November 2016 below here.

The full documentation can be downloaded (as a pdf) from here.

It is also available from the association Kunst am Moltkeplatz KaM e.V.; contact here.

The book has been entered into the Deutsche Nationalbibliothek / German National Library ‒ see here ‒ and into the catalogue of the Nordrhein-Westfälische Bibliographie der Universitäts- und Landesbibliothek / Northrhine-Westfalia bibliography of the University and State Library Düsseldorf ‒ see here.

November 2016 … autumn at the Moltkeplatz: onda with autumn leaves

onda at the COFA Contemporary exhibition in Köln / Cologne

During 17 thru 20 November 2016 a smaller version of onda was on display at the art exhibition COFA Contemporary at the Messe Köln / Cologne Fair making up the booth of the Galerie Clement. Excerpt of a newspaper article of the fair here.

On 23 August 2016 the Essen start-up Thausing Aerial Solutions took aerial photos and videos of onda. Two pictures below; a video is available on youtube here.

On 22 May 2016 there was the vernissage for Martin Pfeifle´s onda, the sixth temporary work in the series junge Kunst am Moltkeplatz / young Art at the Moltkeplatz. A large number of art enthusiasts, friends of the Moltkeplatz and members of the association KaM e.V. followed the invitation by KaM, so that over the afternoon a total of about 200 visitors were present.

After the welcome by KaM e.V., Mayor Franz-Josef Britz conveyed the greetings of the city of Essen, followed by words on the situation of art in public spaces in the city by Prof Dr Gerd Mahler (Chairman of the jury with that same name of the city of Essen). Afterwards, Prof Dr Harald Goebell ‒ standing in at short notice for the curator Dr Marcel Schumacher, who had fallen ill ‒ introduced the artist and his work; texts here (in German).

Regardless of the occasional light rain, the visitors were able to use the hours to exchange about the work and conduct further conversation: both outdoors in the sculptures park next to onda and indoors in the parish hall of the SELK church on the other side of the street which had kindly been made available.

Invitation card for the vernissage; for a poster see here.

Since 14 May 2016 onda is on display at the Moltkeplatz … white and prominent, not to be overlooked.

From 12 May 2016 onda was erected in the sculptures park. All wooden parts had previously been milled and cut and painted twice since 15 April 2016 ‒ with the support of KaM members. Transport and assembly of the substructure and the subsequent laying of the wooden slats took place from 12 May. On the evening of 14 May, everything was finished with the last slats fixed and securely fastened.

On 5 March 2016 the Essen paper Südanzeiger carries the title Pfeifles „Weiße Welle“ rollt / Pfeifle´s „White Wave“ rolling in, also mentioning on its inner pages under the headline „Junge Kunst kommt im Mai / Young Art to arrive in May“ the artist talk of 27 February 2016.

On 27 February 2016, there was an artist talk with Martin Pfeifle and Dr Marcel Schumacher in the parish hall of the SELK church at the Moltkeplatz. The association Kunst am Moltkeplatz KaM e.V. intends to continue its exhibition series junge Kunst am Moltkeplatz / young Art at the Moltkeplatz, which it had started in 2010, with another ‒ the then sixth ‒ temporary work in the sculpture park Moltkeplatz. The project Weiße Welle / White Wave (working title) by the artist Martin Pfeifle has been selected for realization. The installation of the work is planned for May 2016 and the vernissage for 22 May 2016 at 15 h outside by the sculpture.

In the conversation, both the ideas and conceptions and previous works of the artist and the actual plannings for the Moltkeplatz were addressed. About 40 interested visitors followed the conversation and saw, among other things, pictures of previous works by Martin Pfeifle. Afterwards there was ample opportunity to discuss with the artist and the curator. Further information about his other pieces of artwork can be found on the website of the artist Martin Pfeifle.

Impressions of the artist talk in the parish hall of the SELK church at the Moltkeplatz:

On 23 February 2016 WAZ/NRZ reported on the plannings in respect of the Weiße Welle / White Wave and the re-erecting of Heinz Breloh´s Lebensgröße / Life Size sculpture with two connected articles (lower part of the page).

On 17 February 2016 the Essen Südanzeiger reports about the planned project under the title „Weiße Welle“ schwappt auf den Moltkeplatz / „White Wave“ to spill onto the Moltkeplatz.